Barons of the Sea: And Their Race to Build the World’s Fastest Clipper Ship, Steven Ujifusa. Simon & Schuster, 2018. 427 pages. 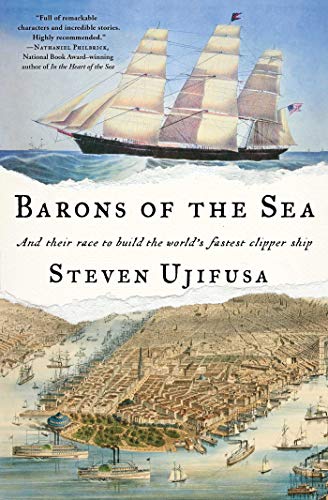 I was extremely skeptical about this book when I first received it. I was familiar with Steven Ujifusa—his book A Man and His Ship was a regular denizen of the sales table at the nautical book store I worked at. I knew that this book was not only not academic history, but that it was very much popular history. Ujifusa doesn’t have a Ph.D. after all, and he is a journalist by training. Further than that, over the past few years my interest in these kinds of books, and my ability to enjoy them has diminished. I am delighted to say that I was wrong to be skeptical. I very much enjoyed reading Barons of the Sea.

In Barons of the Sea, Ujifusa looks very closely at a small number of individuals/families and their ties to trade between China and the United States during the 19th century. He looks at individuals such as Warren Delano, Donald McKay and William H. Webb, and their interleaving relationships and rivalries. Ujifusa writes authoritatively, convincingly, and well. The individuals (it would certainly be accurate to call them ‘characters’) are interesting people of depth and complexity. It’s clear that this isn’t a hagiography of the Excellence of American Entrepreneurs by any means. It is, as far as it can be, a nuanced discussion of the individuals, families, ships and relationships that dominated trans-Pacific trade at the end of the age of sail.

I do have some minor criticisms. In one section Ujifusa describes how the hull shape of the clippers changed over time, using specific examples and a very simple illustration of black solid hull shapes. Although I am familiar with the terminology and the parts of ships, I wish that this illustration had been both larger and labelled clearly with the differences indicated. I wasn’t entirely comfortable with the way that the author presented what I must assume are excerpts from correspondence/journals or other primary sources documents almost as if they were dialogue or comments made to the author. I recognize that this is part of Ujifusa’s journalistic rather than strictly historical style. On the other hand, I very much appreciated that the publishers were able to use both endnotes (for the references) and footnotes (for comments, explanations and definitions). I very much wish that this could be applied to academic history books as well.

This book is clearly the product of somebody having good access to an important group of primary documents. Ujifusa has created a good, entertaining and informative book from that resource. I very much recommend Barons of the Sea to those who are interested in reading about Pacific maritime trade during the latter half of the 19th century.

Craig Chapman : Thanks for getting back to me.

Samuel McLean : It hasn't been built with that functionality ...

Craig Chapman : Will your database be searchable for the date...